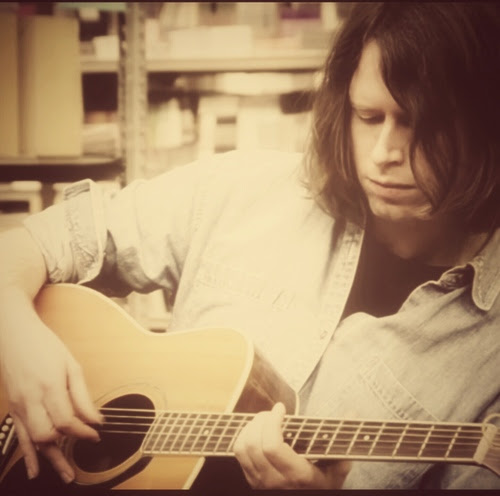 I am thrilled to announce that I have won the Help Musicians Uk / PledgeMusic Emerging Artists Award for my second album Upwards of Summer. The award is for independent artists with no outside funding with the "talent and DIY drive" to build a sustainable, long-term career. Chosen by a panel of industry experts, including Victoria Ree (Universal Music Group) and John Dawkins (Various Artists Management - Charli XCX, The Libertines, Spiritualized etc), the award offers funding and career development.

The award marks the culmination of a wild journey for this record. I am delighted and hugely grateful to win this award. This couldn't have been further from how I imagined things turning out. I made the record sort of as a last hurrah, as someone who'd almost given up; I never could have expected it would go on to win the Emerging Artists Award. At the end of 2016, I was worn out and disillusioned, largely from touring (the photo above was taken in the warehouses of Italian distributor Audioglobe on the first leg of the solo tour responsible for the burn out) but also from the intense workload of self-managing for many years, arranging everything from writing the song through artwork, vinyl runs, touring schedules, radio, releases, copyright, etc. I did genuinely find myself wondering whether I would continue making music. When I got back from the last leg of touring Hoverance I took a bit of time to reassess my priorities. During this time I did begin to write again, tentatively at first, just to please myself really. I also started digging back into my earliest inspirations. The first few days after that tour I went cycling in order to get some light and get over jet lag. I dug my old bike out of the shed and rode around listening to “Hey Jack Kerouac” by 10,000 Maniacs on repeat. I decided that if I was going to stop I should make one last record, something that would give me the euphoric lift I got from that song.

I went in the studio with Margo who I'd made Hoverance with, and with my touring band. We treated it like it was the last record and somehow that changed something significant about how I approached it. Fear went out the widow. I didn't doubt, I didn't second guess, I just trusted. This really helped to heal all the frustration and conflict I'd been feeling. Suddenly it was fun and vital again and not the source of worry and conflicted emotions it had become. Pretty soon after, Spotify picked up on the first single, supporting it on the Indie List, and Elton John picked up on it on his Beats1 show on Apple Music. Then I heard about Help Musicians UK and the Emerging Artists Award, and decided to apply.

I think it will be a real game-changer. By matching the pledge, it enables me to support the record in a way I never would have been able to before, hopefully reaching many more listeners. There's a real danger in self-releases that you spend months or years slaving over every detail of the work and then just chuck it out there with fingers crossed. We can now release 2 more singles from the record, and make 2 more videos, instead of just the one. Just last night I made a video with the excellent Katia Ganfield. I have also been able to consult with some real experts, such as Wrapped Up Music's Tim Ferrone. And beyond the funding, it's actually that realm of support and expertise, as well as the sense of community, that may be the most important aspect of the award. Oh, and of course, confidence! No-one really talks about this, but the psychological implications of getting this kind of support are real. I'd almost given up from going it alone, and to have people like this around me changes everything.

I would encourage anyone in a similar position to apply for this award. The deadline for the next funding round is the 31st July.